On Sunday morning, with our bikes secured to the roof of the Subaru XV, a bit of luggage and two empty hundred-quart Coleman coolers in the back, we pulled out of our driveway and headed north. We had reservations at Smart Suites in South Burlington and a semblance of a plan: to do some biking and some bird-watching, and to investigate the local craft beer scene. Those who know me well might be confused about that last part. But keep in mind that a good marriage is built on mutual respect, which means a good vacation includes compromise. Let’s just say that my husband has a built-in designated driver! And I come in pretty handy when there’s a one-case-per-person limit. For my part, I got to choose our accommodations: amenities and a good deal beat a room with a view. 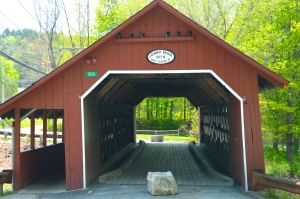 to eat a lunch freshly prepared at the Vermont Country Deli, we arrived at our first destination: Southern Vermont Museum of Natural History in Marlboro, Vermont. 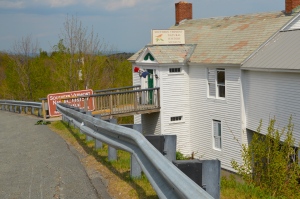 A small place with big name. Here, we got an up close view of a lot of dead birds. But it was fascinating…really! The museum houses the collection of a man named Luman Ranger Nelson, who was able to preserve more than two hundred bird specimens of the northeastern United States in the early 1900s ( a time when humans beings were still in denial about our ability to render a species extinct). A few live, rescued birds also reside at the museum. My favorite were a pair of tiny screech owls. 🙂

Outside, we took in the tri-state, hundred-mile view…

…then headed north to Burlington.

On Sunday evening, Church Street in downtown Burlington provided window-shopping, a stroll (under an umbrella), and dinner. The Farm House Tap & Grill became our new favorite! (We ended up there three nights in a row.) My husband enjoyed his first taste of Hill Farmstead’s Conduct of Life. (That’s a beer — for those who have no more of a clue than I do!).

Monday morning saw our first beer run of the week. A delivery of Heady Topper from The Alchemist brewing company was set to arrive at Route 7 Liquors in South Burlington between 10 and 11 a.m. We showed up early and got in line. 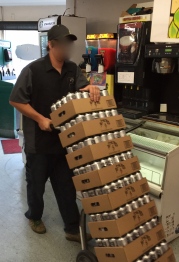 Lots of ice needed to keep things cold for the week! 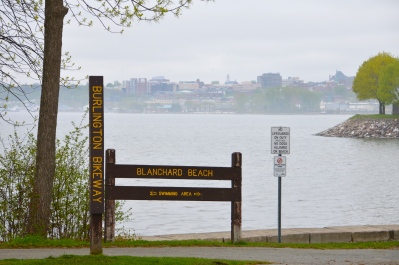 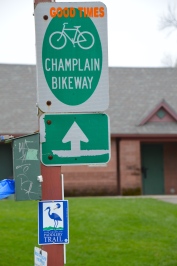 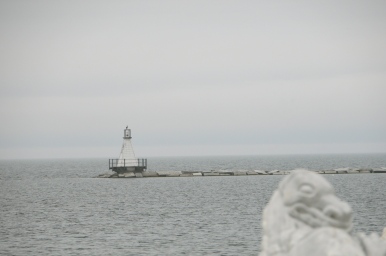 At lunchtime, we checked out the Fiddlehead Brewing Company in Shelburne, bought a couple of growlers, and a wood-fired pizza at Folino’s next door…. 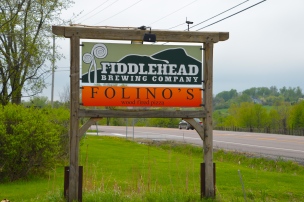 then headed to the Switchback Tap Room in Burlington for a quick beer flight.

The rain moved back in, so we decided to hit the Roxy Cinema in Burlington for a movie before dinner.

Tuesday morning, we made our first attempt at bird watching along the Intervale trail. Unfortunately, it rained on our birding parade…

and we had plans to pick up two more cases of Heady Topper at the Winooski Beverage Company.

So, we waited in line outside and the truck arrived incognito. A few minutes later, they unlocked the doors and snaked us in an orderly fashion through the store and around to the back to pick up our one-case-per-person!

Afterwards, we made one more attempt at the Intervale trail, but it was already late morning. There was evidence of wildlife, but no bird sightings. 😦

…and a tiny butterfly.

A quick stop at the hotel to shower and pack a lunch, then we ran into Burlington for one more case of Heady Topper (are you counting??) at City Market… 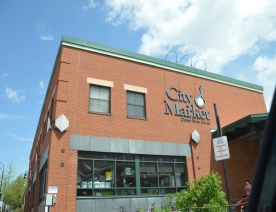 …then off to the Shelburne Museum. The main attraction for me here was an exhibit called “Walter Wick: Games, Gizmos and Toys in the Attic.” Remember the I Spy books? They were Wick’s creation. My kids loved them and the photos impressed me. Unfortunately, no photography was allowed in the exhibit. We found several other interesting exhibits there, as well: paintings, photography, historic buildings, and quilts, among others.

Wednesday morning, the City Market in Burlington was expecting a delivery of Lawson’s Sip of Sunshine. No lines and hardly a wait!

After that, we headed back to the Shelburne Museum, since admission pays for a two-day pass and a headache on my part had cut Tuesday’s visit short. This time, we explored the inside of the Ticonderoga.

It was late afternoon when we stopped at Shelburne Farms, just down the road. I had originally wanted to take a tour and see the cheese-making in progress, but it was too late in the day. So, we shopped: three-year aged cheddar (soooo good!) and a birthday gift for one of my daughters. My husband rode his bike from the farm back to the hotel…that was all the biking we ended up doing for the week.

Thursday morning brought sunshine for our second birding attempt. Back in Winooski, we started at Salmon Hole. The plan was to start there and then drive up to the Ethan Allen homestead trails. We ended up spending three hours at Salmon Hole instead! The following photos are not the best quality, but they were indispensable in helping me to identify some of the birds we saw…

We also caught glimpses of a cardinal, Canada geese, some type of plover, a slew of black birds, and a crow.

On Thursday, we had a dinner invitation from friends, Tom and Patty, who live in Stowe, VT. Our plan was to drive through Waterbury and Stowe to Greensboro, about an hour north of Stowe. There, we hoped to find Hill Farmstead Brewery. And we did… miles off the paved roads, up on a hill. The place was hopping! 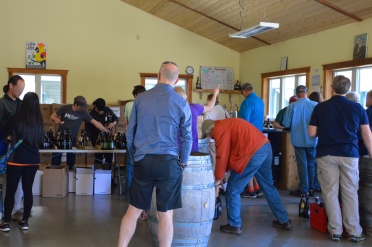 Dinner at Tom and Patty’s was great! My husband brought a few non-Vermont beers to share: Trillium Vicinity, Ballast Point Grapefruit Sculpin, and Trillium Pot & Kettle oatmeal porter for desert. He also shared one of the growlers we bought at Fiddlehead Brewing Company.

The view of the mountains from their front deck was amazing! I even got to do a bit of bird-watching while my husband shared his beer finds with them. A large bird hid in the tall grass of their sloping side yard. They thought it was a wild turkey and I couldn’t tell, even with binoculars. So, I took a few photos. The bird was well-hidden and I couldn’t  see it when I came down the slope onto even ground with it. Here’s the very fuzzy glimpse I got…I’m thinking ruffed grouse?? Any other guesses?

Friday morning we packed up and checked out of our hotel. We planned to drive south, down Route 7, all the way to the top western corner of Massachusetts, where our youngest would be graduating from college on Saturday. Along the way, we had to stop at Robert Frost’s former house in Shaftsbury, VT.

No photos were allowed to be taken inside. But the highlight for me was seeing the original scratching of “Stopping By Woods on a Snowy Evening” framed in the room where he wrote it. 🙂

Robert Frost lived here in Shaftsbury, Vt, in the 1920s…

The only birch planted by R. Frost still standing…

Friday night, we landed in North Adams, MA, at the Porches Inn at MASS MoCA. All in all, it was a full week and fun Vermont vacation!

4 thoughts on “Biking, Birding, and Brews: A Vermont Vacation…”

This site uses Akismet to reduce spam. Learn how your comment data is processed.